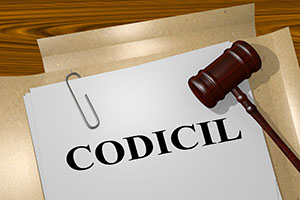 A Codicil is an amendment to make changes to your will.

Letters Can Have a P.S. – Wills Can Have Codicils

The French call it l’esprit d’esclalier. It means thinking of the exact right thing to say but you’re already on the way home. We’ve all done it, and sometimes I do it more than once a day. People who write wills are no exception to the rule. For various reasons, there is often a need or a desire to change a will after it has been written. The term for the document that changes a will is a codicil. You can think of it as an amendment, because it’s essentially the same thing.

Codicils have fallen out of favor in recent times. Experienced estate planners now recommend limiting the use of codicils because they can be confusing and in some cases can even lead to a will being overturned. The better practice is to re-do the will if the changes are large enough to justify it. The main reason for a codicil – saving money – is no longer valid in the age of automation. The cost of updating a will when a lawyer has already written the original is nominal and doing this eliminates the risk of messing up the plan.

Sometimes the reason for updating a will has nothing to do with thinking of a wish after the fact. Other commonly-encountered situations include those where a beneficiary’s need has changed, someone’s family is different (because of marriage, divorce, birth or death) or there are different property needs. Other scenarios include a disability (like a special needs trust) or making allowances for gifts made during life. One of the likely reasons for a codicil is changing an executor, and that might be the only way to make a change in a codicil without inviting unintended consequences, such as a will challenge.

Use a Codicil or rewrite your will?

One of the difficulties with a codicil is that it cannot stand on its own. By definition, it must be read in the context of the prior instrument. This means that both the will and the codicil have to be correct and complete. Because the law’s principal concern is for what the testator intended, the intent must be clearly read from both the instruments. If there is any discrepancy or ambiguity, either or both could be invalidated which can lead to a bad outcome. Even if the intent is clear, most people who are doing anything other than a simple change of an executor would not necessarily want the beneficiaries to know that under one version of a will they were going to inherit more property and now they are inheriting less . . . or perhaps nothing at all.

Another point to keep in mind is that a codicil must be executed with all the formality of a will itself. Witnesses and notaries are required, and the proper procedures must be followed if the codicil is to be upheld. These requirements are mandatory, and the capacity of the testator must also be proven at the time the codicil is signed. For these reasons, alternatives such as re-writing the will, letters of instruction incorporated into the original and even small estate trusts (if changes are likely) are often preferable to codicils.